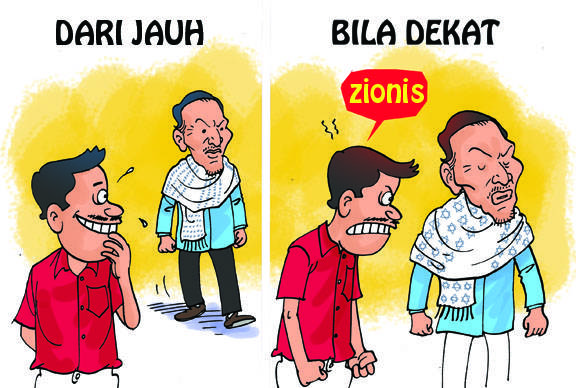 The Human Rights Watch’s (HRW) response to Anwar’s latest stance on homosexual rights has been anticipated by political observers. But whether this is just another political game played by Anwar remains a question. Phil Robertson too, does not brush-off the idea and went on saying, “While this might be a good vote-getting strategy in some parts of Malaysia, his claim shamefully runs completely contrary to the central principle of non-discrimination in international human rights law”.

However, many in Malaysia agree that Anwar is just fishing for votes when he agrees to discriminate himself (homosexual), but whether his ‘masters’ in the west, including Phil Robertson himself is also in the game by pretending to bombard and condemn him in order to ensure Anwar gets the much needed Muslims’ votes in the upcoming GE, we might never know.

anwaraidc web had exposed that Phil Robertson is known to be in close relationship with PKR through their human rights lawyers, namely, Surendran, Latheefa Koya and Fadiah Nadwa. His ‘closest’ acquaintance, however, is Fadiah. It is said that their ‘closeness’ raises brows. These lawyers’ favourite meeting place is in Bangsar Village. Phil has been to PKR HQ a number of times giving talks and trainings on how to use the human rights issue to suppress the government.

Phil has been very vocal in the issue of ISA in Malaysia, which is championed by SUARAM. SUARAM too, has been very busy trying to tarnish the government image in the scorpene submarines purchasing issues. Therefore, we could not be wrong to assume that the HRW, PKR, SUARAM all work as a team.

The team must have realized that they are on the losing side when Anwar received quite a hard slap on the face for his blurry stance on homosexual rights when asked by the media soon after his acquittal from the sodomy case. This, plus the SUARAM’s series of blunders, that left PKR/PR with no real issues to fight, Anwar needs to strengthen his position in the eyes of Malaysians, especially the majority Malay Muslims.

A blurry statement on homosexual rights was a disaster.  What more with his unpopular statement in the Wall Street Journal on protecting the Zionist’s ‘rights’ in the Palestines. Many Muslims abandoned him right away after these two issues. With his chameleon nature is already too obvious, Anwar needs to choose just one character or image, for this particular GE. So, he chooses to show that he is still a devout Muslim who firmly rejects this new religion called ‘Human Rights’ promoted by the west. As a good Muslim, he couldn’t even dare to consider the rights of homosexual, lesbians or transgenders.

He must also convince the people that the west don’t support him as alleged by his enemies. He must erase the image of a ‘western puppet’ altogether. So, we might hear more condemnation by the west towards him after this. Don’t be surprise that in the next few days, we might also hear Anwar firmly rejecting and condemning liberalism and pluralism in religion, although we know for a fact that he lives by them. So, Malaysians, I can only say this:  be ready for this new Anwar but I sure can’t promise you how long this new Anwar will last.

Read more at http://khairulryezal.blogspot.com/2012/07/hrw-condemns-anwar-anwar-struggles-to.html#8slQHfFAF0F32QXr.99
Posted by SiamangBukit at Saturday, July 28, 2012