The Antarabangsa hill billies: I want to be Azmin the billionaire

Posted by SiamangBukit at Thursday, August 20, 2015 No comments: 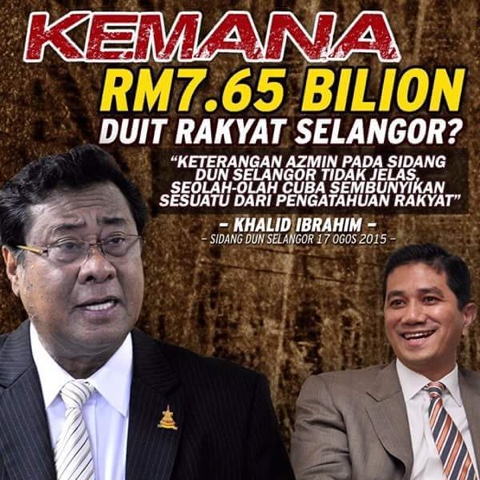 Untuk nyanyi lagu I want to be like Azmin (billionaire) sila layari disini.

Malaysia- Where billions truly lesap.
Posted by SiamangBukit at Thursday, August 20, 2015 No comments:

Bakri Musa: The arrival of Islam was “the most momentous event in the history of the Malay archipelago,”

The arrival of Islam was “the most momentous event in the history of the Malay archipelago,” to quote Syed Naquib al-Attas. It came not through the point of the sword but peacefully through trade. Islam did not land in a cultural and religious vacuum as Malays were already steeped in Hindu and animist traditions. Nor did the Arabs come to emancipate our ancestors; there was no messianic zeal or even an inclination to engage in their salvation.

Those Muslims came only to trade; there was no intention to dominate or colonize. Their Islamic faith and the prevailing Malay culture interacted through gradual and mutual accommodation. The result was that “the local genius of the people shone through” in the melding of the two, to quote Farish Noor, respected scholar and frequent commentator on Malaysian affairs.

This was vividly illustrated with my matriarchal Adat Perpateh. It coexisted peacefully with traditional male-dominated Islam, demonstrating a brilliant and workable synthesis of the two. Malays did not repudiate our traditional ways to become Muslims, and Islam was not adulterated to accommodate Malay culture. Both were remarkably malleable to and adaptive of each other.
This accommodative attitude is best captured by the Minangkabau wisdom, Adat menurun, syarak mendaki (‘custom descended, religion ascended’), in reference to the belief that the Minangkabau descended from the highlands, the heartland of the culture, to meet Islam as it ascended from the coast. Both Islam and Malay were elevated as a consequence of the melding.

Expressions like Adat basandi syarak, syarak basandi kitabullah (Customs based on shari’a; shari’a on Koran), and the more practical, Syarak mengato, adat memakai (Sharia prescribes, adat subscribes) attest to this grand accommodation. The sociologist Taufik Abdullah expressed it best, “The genius of Minangkabau is to synthesize contradictions harmoniously.” There were certainly contradictions real as well as imagined between Islam and traditional Malay culture, but our ancestors took them in stride and with composure.

It is said that a Minangkabau baby is fed white rice and red chili early so it could learn at a very young age to tolerate opposites. Later we would go beyond mere tolerating to actually relishing contradictions. Thus as adults we could not do without our rice and sambal (chili paste).

Of course all these happened several centuries ago, long before the advent of “purist” Islamists. Today these purists would condemn any accommodation of the faith as bida’a(adulteration). Little wonder that Malays of that religious persuasion are today busy rewriting history to obliterate our legitimate pre-Islamic existence. They would like us to believe that prior to the arrival of Islam, Malays were cultureless and devoid of any spiritual values, and that our history began only with the arrival of Islam.
Thus instead of learning and benefiting from the wisdom and ingenuity of our ancestors in synthesizing contradictions harmoniously, these later-day Islamists are obsessed with “purifying” and "cleansing" our faith of what they deem to be “un-Islamic” and “primitive” elements.
These purists obviously have not learned anything from our recent history. They should remember that the last time this “cleansing” effort took place it triggered the Padri War from 1821-37 in West Sumatra. That conflict succeeded only in further tightening of Dutch colonial rule.
Today there is little risk that the Malay world would ever be colonized again, our leaders’ fear of neo-colonization notwithstanding. Colonialism is no longer cool, except in such odd places like Chechnya and Tibet. However there is a fate far worse than being colonized, and that is being left behind by a rapidly modernizing world.
This preoccupation with Islamic “cleansing” distracts Malays, especially the idealistic younger set looking for a cause and meaning to their life, from making their rightful contributions to society. It is far too easy for their religious zeal to degenerate into something sinister, as with futile “jihads” against phantom enemies of Islam.
A notorious and tragic example was the “Bali bomber,” Dr. Azahari Husin. Smart enough to be the top student at Malay College, Kuala Kangsar, he was later selected to pursue his engineering degree in Australia and subsequently, doctoral work in Britain.
By all accounts he was a competent academic and an inspiring teacher. He could have made a significant contribution by training future engineers, quite apart from being a much-needed role model especially for young Malays. Somewhere along the line he acquired a zeal for “purifying” the faith. Instead of making a meaningful contribution, he ended up leaving behind a trail of death and destruction. A needless tragedy, for him, his family, and society!
At the community level, this increased emphasis in religion has resulted in, among other things, our national schools taking on all the trappings of a religious institution. As a result non-Muslims are abandoning the system in droves making these schools all the more insular. Malays too are abandoning the system but for the very opposite reason – these schools are deemed not religious enough! As a consequence religious schools now mushroom all over the country.
Unlike religious schools in America, those in Malaysia are heavy into religion, paying lip service to such important but deemed “secular subjects” as science and mathematics. Then we wonder why local companies cannot get enough qualified Malay applicants.
This emphasis on religion has resulted in the massive expansion of the bureaucracy associated with Islam just to employ these otherwise unemployable Malay graduates. This further encourages Malays to enroll in religious schools, feeding this non-productive cycle. Today thousands of Malay talents are diverted not in producing something for the economy but in the destructive pursuit of keeping citizens along the “straight and narrow path,” as these zealots see it.
If this were to continue, we could expect a modern version of the Padri War, with the Malay community in conflict with each other and be left behind. This time there would be no outside force coming to mediate or rescue us; we would be left destroying each other while the world bypassed us.
The need for Malays and Muslims today is not to further divide us by heaping useless labels as liberal or conservative Muslims, or needlessly dividing us into tudung-clad versus the well-coiffured. As so eloquently stated in the Koran, true piety lies not in turning your face to the east or west (as in praying) rather one who spends his substance on his kin, the orphans, the needy, and the wayfarer.
In order to do that we first must have the substance, that is, be productive. This obsession with the external manifestations of our faith distracts us from being so and thus contributing to the betterment of our society.
Adapted from the author’s latest book, Liberating The Malay Mind, ZI Publications Sdn Bhd, Petaling Jaya, Malaysia , 2013.
Next: The Lessons From Our Encounter With Islam
==++==
Posted by SiamangBukit at Monday, August 17, 2015 No comments: