Dari: Black Monkey from Kuantan
Posted by SiamangBukit at Monday, August 19, 2013 No comments: 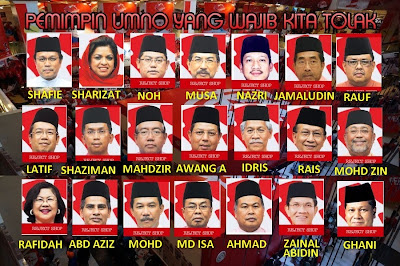 Mentally Disabled Iraqi Man Can Read Quran in Reverse
(Ahlul Bayt News Agency) - He is a man with a mental age of a three-year-old, he can’t count properly from one to ten, can’t write, has only limited reading ability and can’t locate his house if he is lost in the street.
Basically, he is a man who has limited ability when it comes to everyday life. In other words he could well be termed a mentally challenged or disabled individual. But when it comes to the Quran, he is just differently-abled.
Meet Hussain Adnan Sabri, 29, from Iraq, whose remarkable knowledge of the Quran, every chapter, word and verse, is miraculous, to say the least.
Displaying his prodigious talent to a visibly stunned audience, Sabri performed as a guest participant at the Dubai International Quran Awards on Monday night.
He can read the Quran in reverse, knows every verse of the Quran by its number and can point out the first and last verses of every page of the Quran.
“This is a special ability which is difficult to achieve even for a normal individual and, considering his cognitive limitations, it is nothing short of a miracle. It’s a certain gift from Allah,” said Sherzad Abdul Rahman, an eminent scholar and imam of Masjid Hassan Al Shaikh and a presenter at Sharjah TV.
Presenting Sabri to the audience at DIHQA, Abdul Rahman subjected him to a series of testing questions about the Quran, which he answered with ease, much to the amazement of a packed house at the Dubai Chamber of Commerce.
Not only does he remember verses of the Quran by number and page, Sabri can even point to the location of any given word in the Quran with its full details.
“What is more astonishing is the fact that he can even list words in Quran related to any particular root and tell you where the words are located, which only very highly learned scholars can do,” Abdul Rahman said.
Incredible as it may sound, the genius from Fallujah hasn’t learnt the Quran from any teacher. In fact, if you believe his uncle, he never learnt to read or write beyond the Arabic alphabet, yet he reads the Quran with such proficiency that he completes the book twice every day.
“He reads the entire Quran in five hours, it is something unbelievable for a common man. When you see him reading you would feel he is just mumbling and moving his fingers through the verses randomly, but if you stop him suddenly and ask what he is reading he will point to the exact word,” stated an impressed Abdul Rahman.
His uncle, Emad Shakir Al Abdali, who accompanied Sabri to Dubai, says his nephew has been “abnormal since birth”.
“When he was born he was like dead meat. He didn’t cry, didn’t move and didn’t speak until he was four years old. His father consulted with several doctors and each one of them expressed his helplessness in finding a cure,” said Al Abdali, referring to Sabri’s early days.
Al Abdali says Sabri’s father, who has passed away, was a pious man and didn’t lose hope even though all the doctors gave up.
“He was a firm believer in Allah. As a practice he used to keep a copy of the Quran on Sabri’s chest every day and slowly it worked as Sabri showed signs of improvement. He uttered his first word at the age of four and that was Allahu Akbar [Allah is Great],” added Al Abdali.
Then began the miraculous journey as Sabri began reading the Quran on his own and at the age of five years six months he had memorized the entire Quran without any help from any teacher.
Posted by SiamangBukit at Thursday, August 01, 2013 1 comment: