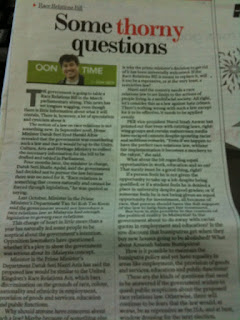 Some thorny issues indeed. It had been for so many years, to me. Everytime, you get to sit down and discuss about Malaysiana issues, with any Chinese, it always the same old questions, why Bumi got 10% discount on housing project, why there is a university quota.

I am beginning to feel so damn tired in trying to explain the same issues all over again. We, Malay say, it is 'buang karan'
Dey, apek, these issues should have been explained by your ownself.

Don't you learn history in school. Don't your ancestors ever taught you that without the special rights of Bumiputera and the AA(Affirmative Actions) policies, the majority of non-Bumis (90%) like you would have been stateless? Or maybe you guys would be British or even Australians.

Jocelyn Tan put a right note to this in her column yesterday, that pre-1946 you guys were just Overseas Chinese or Indian Stateless Citizens.

Yeah, right. You guys will just feel awkward here in Malaysia, because you guys will not even be a citizen. To add insult, China or India wouldn't even want you guys to be their citizens.

Call them , the Malays, stupid. You bet, they are. They should not have cared about these overseas immigrants and took them in as their brethrens. Look, where are the Malays now, lagging in many ways, having to compete in every corner and turns, with the Chinese and Indian, unnecessarily. If we had known, we would make Malaysia only to ourselves. Kenapalah UMNO bodoh sangat bagi kerakyatan kepada bangsa-bangsa yang tidak akan kenal budi baik orang-orang Melayu. Menyesal. Menyesal. A typical Malay man will say just that.

Have you ever been discriminated by chauvinistic private owned Chinese owned companies. I have. Many Malays proffesionals and not, had. Tell that to your leaders, the MCA, Gerakan and even DAP. I would understand the PAP, little sister. But Gerakan and MCA leaders had failed to live up the spirit of independence. The current leaders failed to educate the Chinese and secretly and sinisterly gang up with the DAP against the Malays.

On Oon's comment about Race Relations Act. Why ask Nazri? Why not ask Nurul Izzah about the reasons such AAs were there in the first place? As her, what is the best realistic way for Malays to get hold at least 60% of the economy? Hello, oon. If you still unable to get hold of the answers, let me suggest you to come and talk the Malay on the street and stop hiding in the digital highway.
Come to CravenCafe Bukit Antarabangsa Table A23, and we will be glad to answer you point by point.
Bukit Antarbangsa is where many middle class Malays live. Don't be a chicken like Rafizi Ramli. Even Azmin and Zuraidah has come and talk to us.

Posted by SiamangBukit at Wednesday, January 04, 2012