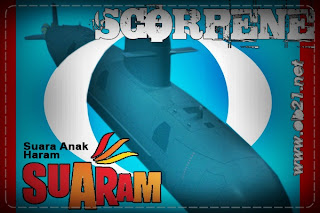 Pakatan Rakyat faces an uphill climb to victory at GE13. With an unforgiving electoral future, it has tried street demonstrations through hijacking the Bersih movement and, starting two years ago, through foreign courts, to bring the Government down.


Suaram, a nominally independent NGO, petitioned the French courts to investigate the Scorpene submarine deal two years ago, an investigation now picking up steam in the time-honoured French manner of suddenly-ending procrastination.

The Scorpene deal has been the locus for much of Pakatan's more bizarre conspiracy theorising, ranging from allegations of bribes directed to Datuk Seri Najib Razak during his time as Defence Minister to a nebulous, never-explained connection to the murder of Shaariibuugiin Altantuyaa, the Mongolian model whose murderers were sentenced to death three years ago.From the increase in the court's activities, together with allegations of never-released 'proof' of wrongdoing by Najib,

Suaram has launched a series of press conferences and events, including a suspiciously political RM10,000 table dinner scheduled for later this month, to promote its agenda and publicise the French court's activities.

Most NGOs do not hold multi-thousand ringgit dinners over foreign court cases, let alone ones that will still need another two or more years to develop, and so it might be helpful to understand more about Suaram.

Ordinary attempts to investigate the organisation appear doomed to failure. The NGO's web site goes to great pains to tell an ordinary reader or viewer nothing about its membership, especially its leadership.The Choice has worked to develop a listing of key personnel.

By no means is this complete; nevertheless, here is a sample:

Cynthia Gabriel, Director of Suaram, is municipal councillor in the Petaling Jaya City Council, appointed by the Pakatan government of Selangor.

Tian Chua is the PKR Member of Parliament for Batu – and of course, PKR's Vice President.

Elizabeth Wong is a former Coordinator of Suaram, apparently still involved in its governance, and is now a PKR state assembly member in Selangor.

Sivarasa Rasiah is a PKR Member of Parliament for Subang, Petaling.

The links continue outside of Pakatan member parties. S Arutchelvan is the Secretary-General of Parti Sosialis Malaysia, a PKR ally; Dr Nasim Hashim is its President.

Premesh Chandran works for malaysiakini.com, and with Tian Chua and Elizabeth Wong was a member of the Network of Overseas Student Collective of Australia.

This pattern – of stacking nominally independent entities with Pakatan Rakyat personnel while hiding their allegiance to maintain the façade of independence – carries over from the Hindraf rallies in 2007, through the Bersih movement, to Datuk Seri Anwar Ibrahim's 'independent election observers' – those such as Nick Xenophon and other

Anwar allies whom Anwar is using to call GE13 a farce – unless, of course, Anwar wins.Anwar Ibrahim is not a stranger to Suaram. He certainly managed to out-fox Ambiga at Bersih 3.0, and transformed a reasonable protest into mayhem.

But Suaram is well known to PKR because so many PKR members are managing Suaram.However, even though Suaram acts like a political party intent on smearing Najib with evidence, it will not even produce this evidence outside of France.

Suaram behaves like a political ally of PKR in everything it does rather than an objective and independent NGO. It is almost wholly made up of Opposition politicians and journalists.

Here are some questions for Suaram:

Why will you not produce copies of the evidence given in the French case that you claim is so very damning?

If as you claim the original evidence cannot be taken out of France, surely copies can be.

How many Pakatan Rakyat politicians, leaders, and party members occupy your leadership? Why does your web site refuse to disclose this information?

Have you informed the French court of your heavy Pakatan membership? The French court has stated that it will be 2-3 years before its investigation is complete.

Why are you holding press conferences and events on the matter now? How is this tied to GE13 and Pakatan's efforts?

Why are you having a RM10,000 dinner over a case that will not be at issue for at least two years? Is this a pre-GE 13 stunt of sorts to attract publicity?

To what extent are you using malaysiakini.com as a dedicated outlet for your activities, and do you disclose your ties with the site to its readers in every article on this case?

How often do you report on your activities to PKR leadership – other than Tian Chua of course, who is not only one of your leaders, but Vice President of PKR?

These are simple questions that any independent organisation would answer without hesitation.Count on Suaram refusing.

Posted by SiamangBukit at Wednesday, June 13, 2012