Life of Annie: Brain under the knee cap, Hot hot chicken shit and the tales of you know who

Just reached home, did the necessary and now winding down for the night.

I got two fans going at full blast. It's very warm these past few days.

Well, a few political things happened today, but I guess you all probably had read them elsewhere, so that I don't think I really have to write it all here.

Okay, maybe a bit only.

The most significant thing today was of course about DS Anwar Ibrahim confirming that he is a chicken shit leader for not pushing through his threat to boycott the parliament swearing-in ceremony.

You can read it here,

It effectively rendered his Black 505 protest against the GE13 results to be just a sick joke. By being sworn in as an MP, it effectively means that he agreed with the outcome of the election.

Now, those Pakatan people who still want to turn up at the planned Black 505 rally this weekend must either be real nut cases or simply have their little bit of brain located under their knee caps instead of their skull. They simply follow whatever their leaders say and can't think for themselves as to what is right and what is wrong.

It actually makes me feel sickly thinking of how stupid my fellow Malaysians could be for allowing themselves being conned by the likes of Anwar Ibrahim.

Now, that should do for the politics today. I don't want to get anymore depressed.

Okay, now to more pleasant things before I go to sleep.

I had a very nice dinner with someone before going home. 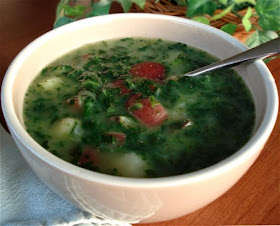 Yes, that's what the spinach soup I had tonight looked like.

He was also very nice to me. We talked only about good things. Nothing about DAP except for his friend who was dumb enough to shave her head in support of the party.

It was so nice that I almost forgot that he is one of the enemies.

Well, it's okay. I think I know now how to control myself when it comes to these sorts of things. I will never be turned to the dark side no matter what.

Every time after I have these nice moments with him, I will remind myself of who I am by exclaiming,

Okay...I'm now going to check on the progress of my Game of Thrones at Facebook and then go to sleep. My Facebook account is actually only for playing that game and poker.