To nuke or not to nuke,that is the question..Black Monkey Part 1

To nuke or not to nuke?

Of late we are bombarded with many trivial questions. Many such questions had been around as long as we had lived. One of these are to building a nuclear plant here in Malaysia.

The intent of the Malaysian Government had been going on since the inception of an institute to study on Nuclear Technology.

More information can be found on Wikipedia:

Malaysia Nuclear Agency (Nuclear Malaysia) has a role to introduce and promote the application of nuclear science and technology for national development.

Established in 19 September 1972, Malaysian Nuclear Agency was then known as Centre for Application of Nuclear Malaysia (CRANE) before it was formally named as Tun Ismail Atomic Research Centre (PUSPATI).

In June 1983, PUSPATI was placed under the patronage of Prime Minister Department and was called Nuclear Energy Unit (UTN). It was then placed under Ministry of Science, Technology and Environment in October 1990. In August 1994, its name was changed to Malaysian Institute for Nuclear Technology Research (MINT).

On 28 September 2006, following its restructuring, MINT was given a new identity,which is Malaysian Nuclear Agency (Nuclear Malaysia). Its strategic location, near higher learning institutions, besides its close proximity to the National Administration Centre, Putrajaya, and the Multimedia Super Corridor, Cyberjaya, has stimulated Nuclear Malaysia to meet its aspirations.

The rebranding followed mass restructuring of its organisation departments, human resource, and the re-alignment of its core business towards establishing nuclear power in Malaysia as an alternative form of renewable energy.

A friend of mine embarked on a study just to address on this particular issue. He used a decision suport tool he had just acquired for his company. The tool uses a special technique called AHP. Information on the AHP will get clearer as the reader journeys further. 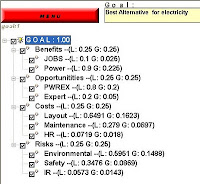 On approaching this kind of complex problem, a Benefits-Costs-Opportunities-Risks model is the most suitable.

Let’s begin with the definitions first.
Benefits are defined as what the stakeholders including the public gets in the short term. The stakeholders include the public, the environment, our foreign neighbours, the state government, etc. Anything that may have an impact or concern to the building of the plant.

Opportunities is defined as long term benefits or contribution.

Costs may not only be in terms of currencies, it may be also intangible.

Risks are those negative impacts that we may in the long run had to endure, safety risks and environmental risks.

(Black Monkey returns in Part2)
Posted by SiamangBukit at Tuesday, May 18, 2010