Anwar Tells the World Our “Sham Democracy” is Out to Have Him Murdered
Saturday, 13 April 2013


Here's a quiz question: How should Datuk Seri Anwar Ibrahim best spend his time ahead of GE13?

• Explaining Pakatan Rakyat's policies to the rakyat.
• Uniting his coalition behind him as Prime Minister, not Datuk Seri Abdul Hadi Awang.
• Singing to a journalist at a hotel in Paris. 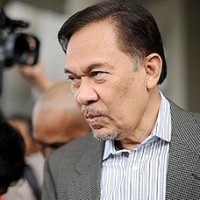 You already know the answer, don't you? London's Financial Times has Saturday run an interview with Anwar in which he was up to his old tricks again; doing all he can to make his homeland look like a murderous dictatorship.

He told journalist Simon Kuper that Malaysia is a "sham democracy" without adding that at the last general election his coalition won in five states and denied the ruling party of its two-thirds majority.

The interview took place in the Hotel Bristol Paris, which is billed as "the ultimate in French luxury and refinement" and the FT reports that Anwar bravely turned up without bodyguards.

"In Malaysia he worries about being bugged or murdered," Kuper shares with us, adding "abroad he feels freer". This must explain Anwar's penchant for jet-setting and swank restaurants. He last met the FT at the start of 2012 at an upmarket eatery in Mumbai.

Once again Anwar couldn't resist name-dropping, recounting how he once discussed Shakespeare with Nelson Mandela. Given how frail Mandela is today, it would be a shame if our final memory of the man were to be Anwar piggy-backing on his legend.

Don't be fooled by Anwar's tedious posturing and ego because when he enters these interview situations he does so with ruthless cunning. All this nonsense about him being murdered (by whom exactly?) is part of a carefully crafted narrative aimed at making his impending GE13 defeat look like the handiwork of a secretive and oppressive regime. He even manages to squeeze into the interview a reference to Iranian and Russian assassins, the inference being that the tentacles of the Malaysian state apparatus could reach out to him all the way to London. "All this opposition to the Shah, to Putin, were killed in London," he tells Kuper.

The biggest problem with the global media and Anwar is that it gives him an easy ride. For example, Anwar tells the FT that he sees Malay supremacy as a "major problem", yet it is conspicuous that Pakatan's manifesto is not mentioning how it would wind back Bumiputra policies at all. To do so would cost votes but the FT didn't pick up on this inconsistency.

The way Anwar speaks to the world through the compliant media is utterly shameless. He cares not one bit whether he makes the land of his birth look like a brutal tin-pot dictatorship. The only thing that counts is his sob story, which no longer has currency in Malaysia but still gets him a free lunch overseas.

Malaysia deserves to be portrayed in a better light than this, which means it deserves better than Anwar.
Sumber: Disini
Posted by SiamangBukit at Wednesday, April 17, 2013