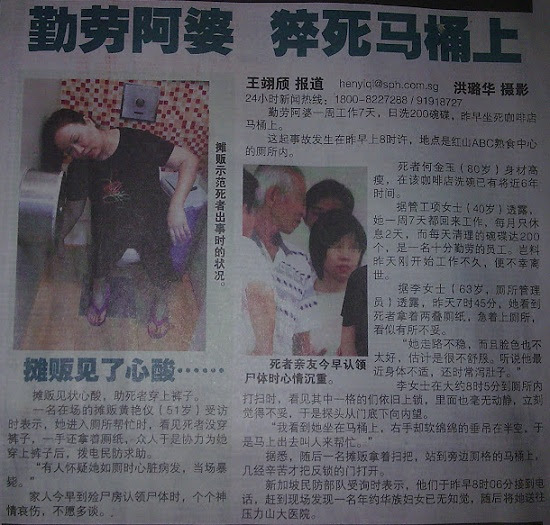 If you are a 80 year old granny in China, Japan, South Korea, Taiwan or Hong Kong, you will probably either be practising Tai-Chi in the park in the morning, having ‘Yam-Cha’ in a tea-house in the afternoon or watching TV with your grandchildren in the comfort of your home at night.
However in Singapore, you will most likely be sweeping the floor, washing the dishes, scavenging for cardboard or begging for money outside temples.
One 80 year old Singaporean dishwasher Madam He Jinyu (pinyin) was found dead in the toilet of ABC hawker center in Redhill where she has been working for the last six years.
According to her supervisor, Madam He worked daily from morning till night and only had two days off a month.
“When I saw her yesterday, she was walking unsteadily and appeared pale. I heard she has been having diarrhoea for the past few days,” she said.
It is not revealed how much Madam He is earning as a dishwasher. More importantly, why is she still working at 80 years old when she has children to support her?
This is the Fate that the PAP has in store for all true born Singaporeans. If you not Ang Mo or FT, and are classified as lower class, be prepared for this.
Now, asking customers to return trays/utensils at hawker centres/food courts to the central collection area is a real bad idea because the number of trays/utensils returned by customers during lunch/dinner time would be enormous during that short period of time.
More old aunties/uncles working at the collection area will die from exhaustion due to rapidly washing the dirty trays/utensils to meet customers’ demand at such a short duration and manpower reduction by their bosses.
Who are the idiots supporting this stupid idea in asking customers to return trays/utensils? Speak up!!
.
source; here
Posted by SiamangBukit at Wednesday, September 19, 2012